Object-Oriented Analysis and Design With Applications 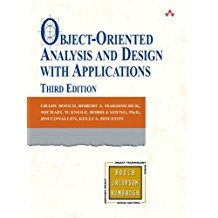 Study Notes Compiled By Donald Cameron
Unless noted otherwise, all word definitions excerpted from The American Heritage® Dictionary of the English Language, Third Edition  © 1996 by Houghton Mifflin Company. Electronic version licensed from INSO Corporation; further reproduction and distribution in accordance with the Copyright Law of the United States. All rights reserved.

The Properties of Simple and Complex Software Systems p.3
“Software” complexity is arbitrary
God is meaningfully complex
man is arbitrarily complex
“Industrial Strength Software Development” – (really big stuff) is intensely difficult and the “whole system” is beyond the comprehension of any single person.

The Difficulty Of Managing The Development Process p.6
large projects demand many different solutions and require teams
teams come with their own set of problems – primarily unity

The Flexibility Possible Through Software p.7
software compares to home building where the contractors start with a forest and an abstraction called a blueprint.

The Problems Of Characterizing The Behavior Of Discrete Systems p.7
life is analog (contiguous events – all events determined directly by previous events), software is discrete (non contiguous predetermined isolated events – initiated simply by activating them – non-deterministic), when we separate the different concerns in a system by creating discrete events one can never be sure all the possible combinations of interactions between these separated elements (concerns) of the software system will always behave as expected, exhaustive testing is impossible; one must employ design methods that foster acceptable levels of confidence in the system’s reliability.

The Personal Computer (moderately complex)  p.9
major parts of this moderately complex system are separate modules that work together
hierarchy from the most primitive (low level) constructs (abstractions) – gates magnetic molecules – to the more highly evolved constructs (abstractions) – disk drives video cards
information and function flow up through these hierarchical abstractions and then out to the other hierarchical abstractions (modules).

The Structure Of Plants And Animals (highly complex) p.10
complexity of these are discovered through the study of morphology and zoology
this is possible because both are comprised of many systems with well defined roles and behaviors
the systems within each work together but are quite different
roots feed stems which hold leaves
mouths chew food to pass to the stomach to pass into the body
at cell level great differences
yet
sufficient similarity for meaningful classification and grouping
As well as many differences and similarities within each field there are many differences and similarities between them
both plants and animals require water, food, oxygen
both are living, both are made up of cells
yet
animals are ambulatory plants are not, plants have sap animals have blood

The Structure Of Social Institutions (profoundly complex) p.11
arise as people group together to do things no individual can accomplish alone
some groups are temporary and others endure beyond a normal human life span
distinct hierarchies develop as institutions grow larger
all members share some resources – the phone system, pay roll, plumbing, electricity
interactions within a hierarchical level more frequent and similar than interaction between hierarchies – one post office may operate quite differently from the next although they report to the same manager.

The Five Attributes Of A Complex System p.12

this nearly decomposable, hierarchic structure is a major facilitator to understanding, describing, and seeing such systems and their parts

The value added by a system must come from the relationships between the parts, not from the parts themselves.”

Point of sanity (reality check) -> … we can never craft these primitive objects correctly the first time; we must use them in context first, and then improve them over time as we learn more about the real behavior of the system.

Thank You for These
God Bless
DWCRMCM
Custodian C4E